“Sure, working to eliminate childhood infectious diseases was complicated, but complexity had never stopped Bill. The first half of his life had been good preparation for the second half. Some people thought he was being arrogant. Bill saw his ideas as fearless thinking. Why set limits on what you think you can achieve?”

Since the founding of the Bill and Melinda Gates Foundation in 2000, global health and vaccine development has always been a priority for Bill Gates.

Last month, Gates wrote on his GatesNotes blog about COVID-19 and the scientific advances needed to stop it. Since then, the Bill & Melinda Gates Foundation has committed $250 million directly to fight the pandemic and pledged that his foundation would give its “total attention” to this unprecedented crisis.

The Foundation’s past global health focus has been on the eradication of HIV, malaria and polio. Now, it has shifted resources almost entirely to work on COVID-19, even to the extent that their non-health related work, like K-12 schools and higher education, has changed to examining how they can help facilitate more effective online learning.

It’s been a long and varied journey for Bill Gates. He has now spent more years as a philanthropist than a technology visionary, and the work he is undertaking may, in retrospect, be even greater than his innovations at Microsoft.

Gates would be the first to admit that tackling COVID-19 is daunting, but daunting tasks usually made him work harder and think smarter. He also believes in the power and rippling effect of individual commitments and choices—something vitally critical to our collective success in this pandemic.

Kids, as well as parents and teachers, can find more inspiration as well lots of background history and science about Bill Gates in my new picture book, Think Smart, Be Fearless: A Biography of Bill Gates, illustrated by Vivien Mildenberger and published by Sasquatch Books.

The world is lucky that he has never been easily deterred and remains an “impatient optimist” in his ambitious goals. As I write in the book, “Bill wasn’t afraid. He knew the answer was out there somewhere. He just needed to find it.”

Parents and teachers: To entertain, inspire and instruct children during the Covid-19 crisis, I will be posting audio readings throughout the month of April of the chapters of my middle grade historical novel CHASING AT THE SURFACE. The book, for readers ages 9-12, grades fourth to seventh, was inspired by an actual event that occurred in Dyes Inlet, WA and is the Winner of the 2016 National Outdoor Book Award, Children’s category.

The first 10 chapters are accessible now at this link, along with PDF downloads of an orca genealogy chart and map of Dyes Inlet, WA, the location of the book. Inquisitive kids can email me any questions at sharon@sharonmentyka.com and I will periodically post answers here. Enjoy! #SCBWIConnects

Happy Birthday to me!

My new children’s book biography THINK SMART, BE FEARLESS: A BIOGRAPHY OF BILL GATES is out today from Sasquatch Books!

This is such a positive story to research and write. Thank you to everyone who helped make it happen. I look forward to sharing it with you. Kids and families welcome!

My new children’s book biography THINK SMART, BE FEARLESS: A BIOGRAPHY OF BILL GATES
will be out on Oct 15th from Sasquatch Books and is available now for pre-order from your local bookstore.

How do fearless ideas begin? Travel along with young Bill Gates on his life’s journey full of curiosity, discovery, hard work, and most important, fearlessness—the inability to see limits. The book invites young readers to pursue their passions and awaken a sense of ambition and responsibility for others as they grow.

I’ll be doing two Seattle launch parties and I would love to see you there!
Kids and families welcome!

This summer I was invited to participate in a great writer-artist collaboration.

For the past 14 years, Facèré Gallery in Seattle presents Signs of Life, a combined contemporary jewelry art exhibition and literary journal featuring the work of nine jewelry artists and nine published writers, culminating in an exhibit and a publication celebrating both literary and jewelry arts.  Each writer is given an image of a piece of work by one of the jewelers, and asked to respond with a piece of short fiction, poem or essay. The only restriction is that the writer not write about jewelry.

I was so happy to be included and pleased to be able to share my short fiction story here with you (PDF link), inspired by our Northwest landscape and jeweler Melinda Risk, whose beautiful work you can explore more of here.

Reprinted with permission of Facèré Gallery.

So glad today to post a few Q&A’s from an interview I did with Yi Shun Lai, a super special writer and fellow alum of the Whidbey Writers Workshop MFA program. Yi Shun is currently on a book tour for her newly released debut fiction title, Not a Self-Help Book: The Misadventures of Marty Wu, published by Shade Mountain Press. Shade Mountain’s mission is to publish “literature by women, especially women of color, women with disabilities, women from working-class backgrounds, and lesbian/bisexual/queer women.”

A little background: Marty Wu, the book’s protagonist, is a compulsive reader of advice manuals, who dreams of presenting herself as a poised young advertising professional. Instead she trips over her own feet and blurts out inappropriate comments. The bulk of her brain matter, she decides, consists of gerbils “spinning madly in alternating directions.” After a career meltdown that sends her ricocheting between the stress of New York and the warmth of supportive relatives in Taiwan, she faces one domestic drama after another, including a formidable mother who’s impossible to please, an annoyingly successful and well-adjusted brother, and surprising family secrets that pop up just when she doesn’t want to deal with them. 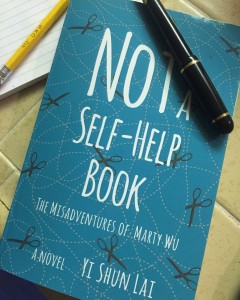 Sharon: Marty, your book’s protagonist, tells us her story thru diary entries. Perhaps because of the form and the nature of Marty’s misadventures, there have been the inevitable comparisons to Bridget Jones Diary. Can you tell us why you chose that form and how that influenced your writing of the story?

Yi Shun: It happened in the most organic of fashions and it was by no means an easy or quick route. I messed around with a few different forms: from first person to third to first again, until finally settling into epistolary form. In the end, it was the character herself who demanded it. The voice itself is a key part of what I believe, ultimately, is a re-telling of the American success story. While I was writing, I imagined that the voices of the young women who were the stereotypical “good girls” of any culture would be a lot louder than we were told or imagined. That voice had to speak for itself. Therefore, diary.

Sharon: You were born in Taiwan and raised in American, like Marty. Are there elements of Marty’s story that relate to your own life?

Yi Shun: Oh, sure. Certainly the overarching themes and philosophy of the story relate. And when I was a lot younger, I was convinced that my experiences were unique. Oh, was I wrong. So although the book reflects some of my experiences, it also draws from so much of what I have been told, and witnessed. A book that’s ostensibly about one culture also resonates with others. Writing and reading are beautiful things that way: they presents opportunities to connect with other cultures.

Sharon: How much did Marty’s bi-cultural background play into her personality? Are there parts of her make-up that you see as typically Taiwanese or typically American?

Yi Shun: At this stage in her life, Marty would say that who she is comprises much of how she was raised. Her quick tongue, I think, is biologically inherited. But her confusion is entirely a product of her bicultural upbringing. The answer to your question though is, a lot. Marty thinks she’s uniquely damaged because of her bicultural background, so we’ll respect that, even if she’s not unique in this regard, or not even particularly damaged in the grand scheme of things. She’d also say that her bounce-back mentality is stereotypically American, and that her need to please her parental unit is stereotypically Taiwanese. But I think we, as readers, can see that the things she’s struggling with are more human than they are any one particular ethnicity.

Sharon: You do a great job of telling a serious story with humor, which I found particularly important in the scenes between Marty and her critical-bordering-on-abusive mother. Was that a challenge, finding a good balance when you were writing?

Yi Shun: Yes. Someone asked me recently what I’m most proud of in this book. I hadn’t ever thought about it earlier, but now that I’ve had a chance to consider, I think it’s exactly what you posit above: Trying to show everyone a glimpse of what this alternate American experience could be like, while preserving Marty’s voice.

Sharon: This one is for all the writers out there. How long was this idea simmering before you felt was ready to start submitting to agents or editors?

Sharon: Can you share what your working on now?

Yi Shun: With pleasure! I’m working on a novel that involves some time travel: and Ernest Shackleton, one of the greatest explorers ever. I’m pretty excited about this project…but first, there’s marketing, and book promotion, and so many more other readers and writers to meet.

Thanks Yi Shun!
You can learn more about Yi Shun’s life and writing at her website The Good Dirt or on Twitter @gooddirt

One summer away from earning my MFA in Creative Writing for Children & Young Adults from the incredible Whidbey Writers Workshop seemed like an opportune time to begin writing about the practice of writing. My MFA will be specifically in the genre of writing for children and young adults, (visit my website for more info) but I imagine I’ll be touching on impressions related to writing of all sorts here. Welcome!

So beautiful—the tulip fields up in the Skagit Valley were amazing! I haven’t made that trip in many years and after today, I don’t know why! #tulipsofinstagram #skagitvalleytulipfestival
Are you a synesthete or do you know someone who is? I’m working on a book with a character who lives with synesthesia and I’d love to speak with you. DM me if you’re willing to talk! #synesthesia
Such a beautiful creative life for 104 years.
This is a great opportunity for emerging children’s writers. Some great mentors this year. Several folks should go for it. I’m thinking of you @ramlah.design ! @scbwiwwa
I want Sue Bird and Megan Rapinoe as greeters when I get my vaccine! Thanks @sbird10! @lbfbooks
Every year I think maybe I won’t feel like gardening this year. Then spring arrives. ❤️ And my kale wintered over this year! #helleboreseason #kalesurvived

I love to write and I love helping students learn how they can become better writers. Since 2010, I have worked with dozens of high school students helping them brainstorm and craft great college admissions essays. Click on the College Essay Coaching tab (above) for more information.
Loading Comments...
Comment
×
<span>%d</span> bloggers like this: